The House of Harmony

The House of Harmony

Cancer and I are on a first name basis.

When we first met with the surgeon about Harmony’s diagnosis, he asked us, “Do you know anything about cancer?” I wanted to come back with a rude and smartie-pants answer. A hundred frustration filled responses came to mind, but I  also knew I was angry and hurt. Those kinds of emotions weren’t what was needed at this moment.

Nine years ago, the hub-a-dub’s brother found out he had stage three lung cancer. In order to be closer to the Vanderbilt Cancer Center for treatment, he and his second ex-wife temporarily moved in with us for about 6 months. His own dog, Harley (a Tennessee Red) was left at home in the care of their (hub-a-dub and brother-in-love) aging mother. While there, Harley disappeared. An “antifreeze” crime spree that took the lives of much of that neighborhood’s pets was what we figured to his end since we never saw him again.

My brother-in-love was heartsick. Then a friend of his brought him a lab puppy as a replacement. All of us know there are no replacements, one just makes room for another in one’s heart.  But for this little black lab, the brother-in-love was so sick and angry at his own plight, he had little time to spend with a rambunctious lab puppy. She wasn’t loved the way she should have been. His misdirected anger kept him from allowing her a place in his heart. Out of obstinacy he wouldn’t even give her a name. She was nearly a year old before she received that honor.

As the brother-in-love got sicker, he had to spend a night at Vanderbilt for testing. We didn’t know the cancer had gone to his brain, but we knew something wasn’t right when he went without sleep for nearly 2 months. On this particular night, a nurse came in with a book and told us that she was his “sitter” as he would yank all the IVs and monitoring devices off. She was a beautiful young African-American girl. The hub-a-dub immediately told her, “I’m so sorry, but I want to apologize in advance for the night you’re getting ready to have.” We were so struck by the caring devotion of this girl that we decided to name the little black lab after her, Harmony, who unselfishly cared for this sweet dog’s only pawrent.

It was the next morning when the brother-in-love departed this world and Harmony was without a master. She moved on, like Harley, to Grandma’s to live a life of running, chasing and swimming on 40 some-odd acres. But trouble was just around the corner. Just like the brother-in-love, 7 months after the death of her master, the sister passed of cancer as well. What needs to be said here is that the father (grandpa/father-in-love) had passed of cancer 30 years prior. With a broken heart, Grandma (mother-in-love) passed within a year leaving Harmony alone and homeless.

As the only remaining immediate family member to the hub-a-dub, it was an easy decision to bring Harmony into our home and hearts.

She’s one of those pups that impresses you with sweetness upon initial meeting. Her first vet visit resulted with him telling the hub-a-dub that she was an amazing pooch who was well behaved and absolutely beautiful. He said that she could easily do commercials. I joked and told the hub-a-dub he should quit his job and become the dog’s agent! LOL!

It wasn’t but a couple of years down the road when a stray puppy was brought to us by our neighbors. She had been dropped off with spay stitches and an infection. Of course we took her in and felt she was the perfect match for our Harmony. That’s the day Melody was added to the pack. 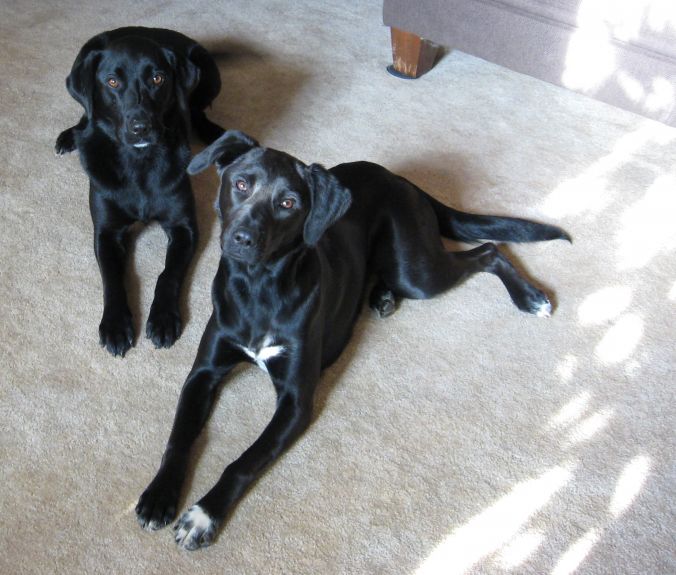 The House of Harmony was complete.