Missing But Always Near

I’ve been away. I can’t really put my finger on it, but I think that sometimes I equate this site with the grief of losing Harmony. Today, as I meandered through some of the posts, my heart was twisting as I tried to feel joy for all those fur-babies who have humans to care for them. I tried to feel relief for those who aren’t suffering any more. And lastly I tried to feel compassion for those who have taken on the “journey” whether it be a few days or a few years.

I know that we (and our fur-babies) won’t live forever and I’ve lost friends and family, but I’m perplexed as to why losing Harmony still feels like a raw nerve.

She visited me in a dream last week. It’s the one-and-only time this has happened. In my dream I was broken down on the side of the road of a desolate area. It was dark, lonely and very scary. I got out of my car to look up and down the highway to see others, but there was no headlights in sight. I was panicking when a dark object came toward me. It was Harmony in her favorite blue harness. She looked up at me and I immediately found peace and safety. We walked together side-by-side in the darkness until I woke up. Even now I still feel the ‘warm and fuzzies’ I felt when waking from that dream.

Since my last posting, Kingston (AKA Double-stuff) has had three surgeries for MCT. Thank goodness the tumors were detected early enough to be dealt with surgically. We are now 7 months post-surgery with no recurrences. While we check his flesh regularly, we can’t check his internal organs, but we’re optimistically hoping that we’ve addressed the monster and have put it to bed for a while. He is doing very well. The vet approached us about chemo, but he’s six years old now and, for a British Golden that’s a pretty good age, we decided to keep him as happy as we can. He has already spent three months in-and-out of the hospital with sutures, prescription drugs and E-collars. We felt it was time for him to be a dog. We did have a little side trip to the vet due to him eating a bunch of rocks (Good-God-Gurdy) but with some special meds he was able to pass them all. He’s still eating rocks, but at least it’s not 20 at a time.

We’ve also acquired a fourth fur-baby. Completely unplanned, we rescued a puppy we found eating road kill on the side of the road. Unable to find her human (we think she was dumped) we waited to turn her over to authorities. However, the 2 days we had to wait for the establishment to open, we became attached. We took her to the vet to scan for a chip and also to get her health evaluated. She had a cough, worms and still intact. But before the vet would see her we had to give her a name. And let me tell ya, this girl is very vocal. She can hit notes that would put Mariah Carey to shame. 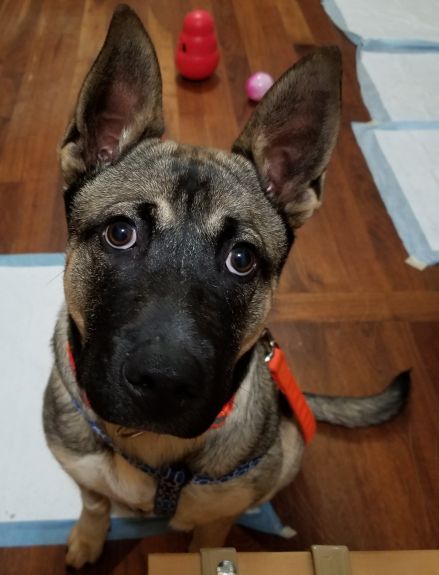 And the best part of this? Her and Mel play like Mel and Harmony used to play. (comforting warm-fuzzy heavy sigh)