Spring has always been my favorite time of the year; for me it’s Mother Nature fulfilling the promise of new hopes, new dreams, new beginnings.

For the House of Harmony, spring is all about vet-checks, vaccines, mud and hair . . . A LOT OF MUD and HAIR. Four large puppers, the hub-a-dub, and an unusual wet spring ensures my investment in lint rollers, Febreeze and Skunk Oder Removal (I buy all by the case). On a side-note here, the Skunk Oder Removal stuff is great for the wet dog smell. And on the occasion we deal with skunks (not a matter of if, but when), at least I’ll have it handy. Last time I tried the tomato juice remedy and had the fight the other dogs licking it off the skunked one. Who knew!? We use the Jacuzzi tub to bathe them which is an all-day-affair. If it didn’t traumatize them, I’d turn the dang thing on and “bubble” them clean! LOL!

Mariah (aka – Little Bit, Dumb A–, OMG How Can A Little Dog Stink So Much) went for her check-up earlier this week while Mel (Melody) goes today to have her lumps and bumps evaluated. Because she’s getting older (she just turned 9), she’s starting to have maladies that are most often chalked up as geriatric normalcies. She’s also, thanks to the hub-a-dub, getting “fluffy” which is a cause for fatty tumors. Thanks to Harmony, we don’t take them lightly and have them checked regularly.

Double-stuff (aka – Kingston, Stinkie, Buddy, Big-Boy, also answers to Dumb A–) had a bout with MCT 18 months ago. So far (knocking on all the wood I can see) he hasn’t shown any symptoms of recurrence. MCT is what took our Harmony so we’re vigilant about his well-being. He will turn 7 next month and doesn’t appear to be slowing down. He also is getting very “fluffy”.

Meesha has been in three dog fights in the last six months. The last fight ended with her in the Vet-ER getting stitched up. The garage floor looked like someone had been murdered. We don’t know why she has started bullying Mariah, but Meesha is always on the losing end. Because of this we’ve had to tweak the pack arrangement so that the two are never unsupervised in the pack. It’s been a challenge along with the fact that Mariah has figured out the e-fence and gets out when we’re not watching.

The hub-a-dub retired in September and has taken the job of house-husband (I’m still working) which includes the daily care of the fur-babies (which also explains the sudden rise in fluffiness), bless him. He went from button-down oxfords to a cross between Cousin Eddie and Steve Martin’s character from The Jerk. Really, he did  . . . I have pictures. My mother asked, “Has he forgotten how to use a comb?”  My response was, “As long as he has a hat . . . (shrug shoulders)”

As you can see the House of Harmony is crazy busy on the tamest of days.

Tripawds will never, ever be far from my heart.

I hope spring brings all y’all the love that blooms in the heart of those who choose to hear the birds sing. ♫ 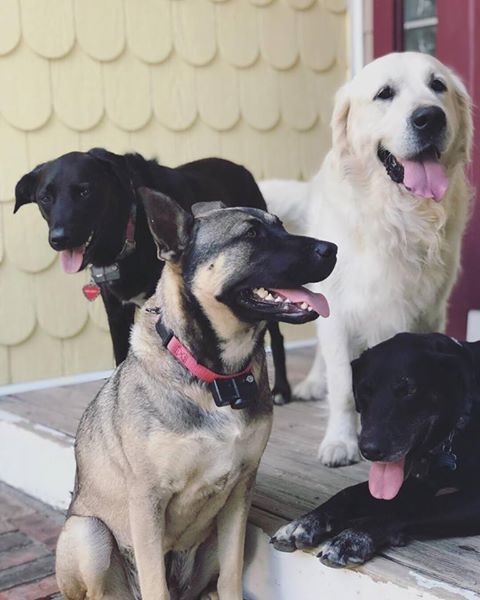